Bilbao will celebrate the carnival from 9 to 11 February and for those days, the Committee of celebrations of the city of Bilbao has designed a program of Carnival of Bilbao 2018 with a hundred activities that is presented with concerts, Kalejiras, ballroom dances, activities Children, theatre shows, gastronomic encounters, competitions or the famous costume contest will be held during six days of popular and participative celebration, starting in the afternoon of Thursday, February 8th, when you can enjoy the first Shows.

Here we present the complete activity: Infantile program, detention and trial of Farolín de Zarambolas; The activities and costume contest on Saturday February 10th, as well as Sunday's programming with the bean contest and the burning of the sardine. 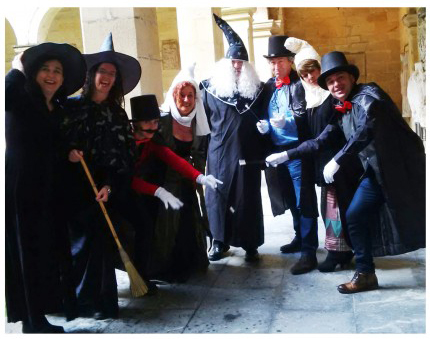 On Friday 9 starts the party with the strong plate of children's programming. At 10:30 the parade of schools in Bilbao will begin in the gardens of Albia and cross the Gran via until you reach the Plaza Nueva, where from 11:00 H. School children will enjoy a great chocolate.

In addition, the children's public will have a specific schedule on Saturday, Sunday and Monday. On Saturday 10, in the Plaza del Ensanche, children can enjoy, between 12:00 and 14:30 H. And from 16:30 to 19:30 H. of Gargantua, inflatables and children's workshops; While morning and evening the fanfares, the Giants and the bagpipers will fill the carnival with music and joy.

The theatre will also be very present in the day of Saturday. At 12:15, in Albia, Irrien Lagunak will amuse big and small with their spectacle Irrikula Makula and Goloka will represent Berpiztuak in the Plaza of the Ensanche, at 13:00 hours. Panpotx Kultur Elkartea, for its part, will offer three passes of his work Fiesta in the Baserri, in the building of the Ensanche: at 13:00 hours (in Euskera), at 16:30 (in Castilian) and at 18:30 hours (in Basque); All with free admission to complete seating

Also, on Sunday 11th from 12:00 to 14:00 hours, the Giants and big heads will take a trail chasing and making enjoy small and old from the Arenal to the Plaza del Arriaga, where the Gargantua also installed in the same schedule.

Finally, on Monday 12, at 12:30 hours, in the Marque de la Plaza Nueva will be held a participatory concert of the Bilbao Municipal band with Patxi Gonzalez for family audience and, from 17:00 hours in the same place , there will be inflatables, games and children's workshops.

The Joint Committee of celebrations of the city of Bilbao has chosen the most popular characters of the Carnivals Bilbao: Farolín and Zarambolas, that this time will be incarnated by the actor and innkeeper Mikel Martínez-regent of the Café Bilbao in the Plaza Nueva-and By the rapper Elena Caballero, La Basu-one of the benchmarks of the current Hip-Hop scene.

Farolín is a Bilbaino or Bilbaina – although not born in Bilbao itself-, which is notably distinguished in its professional or public activity, boasting in addition to its botxera condition, and whose main motto could be Semper Plus Ultra (always beyond). Zarambolas is a Pancho or a pancha, a person from Bilbao to which nothing affects or changes his life. Champion of good living, his way of life is synthesized in the Carpe Diem.

The trial between Farolín and Zarambolas arose in 1984 to institute one of the most representative elements of the traditional and rural shrovetide, where the bad people of each year were judged and condemned. In the case of the Villa, it was decided to give the subject a txirene treatment, avoiding the good-bad equation and opting for an award in humorous tone with the purpose of putting in Solfa the duality of the archetypal personality of the Bilbao.

The trial of Farolín and Zarambolas will take place on Friday, February 9th, at 19:30 hours, in the tent of the Plaza Nueva. After the same, at 21:00 hours, will take place his derision, with Coplillas of carnival and dances with the group Beti Jai Alai, in the Plaza of Santiago. To close the night, at 22:30 hours, the artist Asier Bilbao will represent the Spectacle Bilbao-Karnavalokas, again in the tent of the Plaza Nueva. 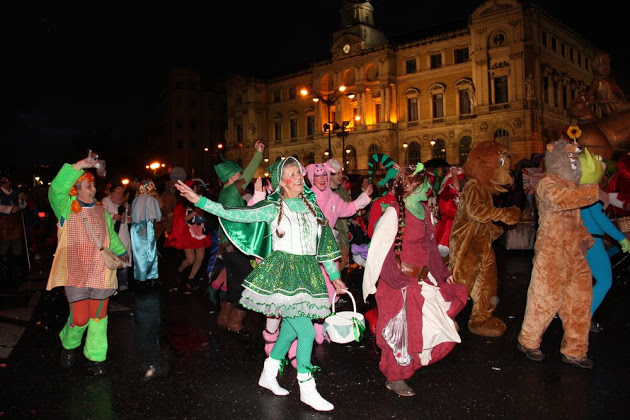 From 12:00 hours, in the surroundings of the Plaza Circular, Berastegi, gardens of Albia, the square of the Ensanche and the street Astarloa will be given concerts, bertsolaris, theatrical shows, tastings of gastronomic products, infantile workshops, Fanfares, Giants and big-heads pipers and, of course, the Carnival costume contest.

The jury will be placed, from the 17:00 hours, in the scenario located in Astarloa, to evaluate the costumes the different groups and troupes that make their traditional parade starting from the Plaza Circular and passing by the street Astarloa and the square of the Ensanche to the end of the gardens of Albia. In addition, between 17:30 and 20:00 hours people who want to go to Berastegui Street to get a selfie with the sardine.

From 19:30 the festival will move to the old town, first to the Plaza de Santiago and then to the tent of the Plaza Nueva where, at 21:00 hours will be presented the prizes of the contest and will conclude with a great carnival dance with the Orquesta Passarela.

On Sunday February 11th the traditional Bean contest will be held in the Plaza Nueva. In the morning you can also enjoy the Giants and big heads, and in the afternoon, at 18:30 hours, the show will take place Euskal Herriko Inauterietak, by the hand of Beti Jai Alai Dantza Taldea.

To dismiss the carnivals will take place one of its saddest rituals; The burning of the sardine. At 19:30 hours, in the Plaza Nueva, will begin the burial of the sardine, and your body will be moved from there to the Plaza Arriaga, where at 20:00 hours will take place its burning. The city Council encourages the citizens, one more year, to join in mourning and carrying candles. 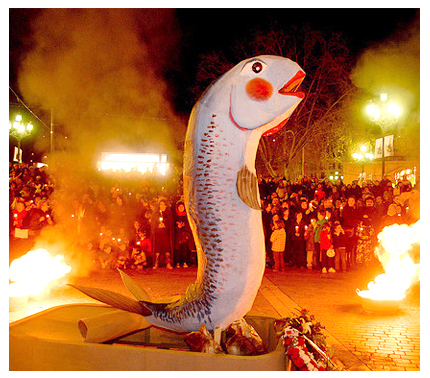